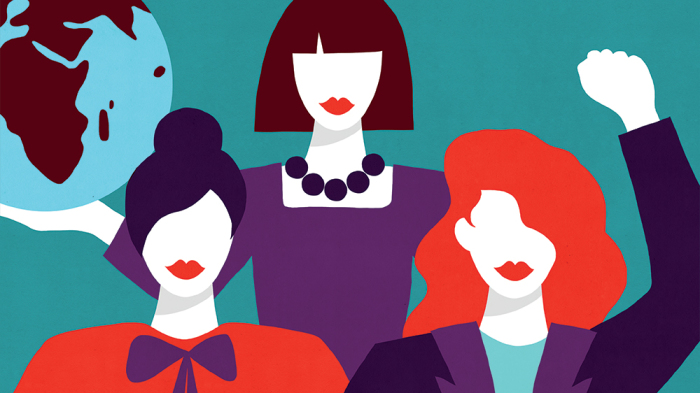 Showbiz Women Prevail (and Persist) Around the Globe

Let’s face it: It’s not always easy to be a woman in this world, let alone a showbiz leader that happens to be one.

There are the usual leadership obstacles to overcome, plus downright sexism and resistance in certain pockets of the planet. Yet, these women persist.

The 50 women on this list are doing extraordinary things on the worldwide stage. They range from J.K. Rowling, a formerly strugg-ling single mum who built a multimedia empire around a boy named Harry Potter, to Mo Abudu, dubbed the Oprah of Africa, and the Scandinavian TV execs who fostered Nordic Noir. Plus performer activists including Britain’s Emma Watson, Nollywood star Omotola Jalade Ekeinde and Asia Argento of Italy; international execs who have made incursions into U.S. markets, such as Studiocanal TV’s Rola Bauer and Keshet Intl.’s Keren Shahar, and those in Asia and Europe who believe the key to survival in the increasingly global entertainment biz is strong local programming.

Russia’s Pussy Riot, touring the U.S. for the first time, also made the list.

It’s a heartening group at a time of sobering headlines about sexual harassment and pay disparity around the globe. Actress-producer Salma Hayek, a long-time activist for women’s causes around the globe, believes the spotlight on these issues in the entertainment industry is already creating change for the better.

“I’m extremely optimistic,” says Mexico-born Hayek, who serves on the board of her French husband, Francois-Henri Pinault’s, Kering Foundation and co-founded Chime for Change with Beyonce. “I’ve been doing this for 25 years. I know what it feels like when it’s not moving because I had to push that wall for 25 years when it was not moving, and I feel a huge difference now. For people who’ve never looked at it before, it might feel like it’s not moving. But I can compare it to other times.”

Still, Hayek would be the first to admit that there is plenty of work to be done — and it might take a while.

Indeed, gender parity on a global scale is more than 200 years away, according to the latest World Economic Forum’s Global Gender Gap Report. The report, issued in November, a month after the Harvey Weinstein sexual harassment exposes roiled Hollywood, determined that there were steps back in certain regions, along with advances elsewhere.

That matches feedback from our international entertainment leaders: There have been demonstrable advances, and notable achievements, for women in certain regions, while others are far less welcoming to female showbiz leadership.

“As a woman in a male-dominated industry, I’ve had to be strong, focused and relentless — and work twice as hard as the men around me,” says Abudu, who built her EbonyLife TV empire in Nigeria from daytime talkie “Moments With Mo.”

Raffaella Leone, co-CEO of the Leone Film Group in Italy, invokes the famous line about Ginger Rogers having to do everything Fred Astaire did but backward and in high heels as metaphor for “what a woman still has to do today to reach certain positions.” It’s much easier to find women in top leadership positions in America, “but it’s starting to happen in Italy,” she says.

Actress-director Asia Argento, under attack for outspokenness in Italy, leads the Women’s March in Rome early this year.

Greater representation is on the minds of many of these women.

Eleonora Andreatta, head of drama at Italian pubcaster RAI, greenlights around 70% of the country’s TV series and is using her perch to change how women are portrayed on local TV; she recently talked about the need for flawed women on screen — certainly a male fixture in American dramas — at a conference in Rome.

Cora Yim wants to cultivate new talent as SVP of Chinese entertainment and original productions for Fox Networks Group Asia Pacific, but “we need more women storytellers,” she says. “Most of the successful directors in this part of the world are men.”

Some countries are actively working to increase the number of female directors. Anna Serner, CEO of the Swedish Film Institute, began lobbying for gender parity in film funding after her appointment to the government agency in 2011, and soon reached parity, naysayers to the contrary. When she started female directors were getting 26% of funding.

Female directors have received nearly half — almost 48% — of Qatar’s Doha Film Institute grants since 2010. CEO Fatma Al Remaihi says this near gender parity “just happened naturally, and that is the way it should happen everywhere else.”

Other showbiz communities are following Serner’s lead and forcing the issue. In late 2016, BAFTA instituted a requirement that beginning in 2019 films must conform to the British Film Institute’s diversity standards in order to be eligible to compete for its outstanding British film and outstanding debut for a British writer, director or producer awards.

As with the Academy of Motion Pictures Arts and Sciences in the U.S., it has also pushed to diversify its membership ranks. Showbiz women there have also been pushing for gender parity through the Time’s Up campaign.

In February, “Beauty and the Beast” star Watson, who has done advocacy work for the U.N., donated $1.4 million to a newly established U.K. justice and equality fund, a complement to a similar U.S. fund.

There are plenty of bright spots for women in U.K. showbiz: Beyond a remarkable talent pool that regularly works in high-profile Hollywood projects, and Adele, arguably the music industry’s most pervasive artist, the U.K. has a deep bench of TV executives overseeing international hits such as “The Biggest Loser” “Idol” singing competition shows and “The X Factor,” plus leading theater producer Sonia Friedman, who has won numerous Olivier and Tony Awards and branched out to TV productions such as “Wolf Hall.”

To be sure, showbiz can be notoriously challenging whatever your gender — or country.

“It’s a tough and demanding industry regardless who you are,” says Genevieve Hofmeyr, co-founder and managing director of South Africa’s Moonlighting Films, who is gratified to be able to “make a difference to other women’s success.”

Argento’s experiences in Italy are a sobering reminder how entrenched sexism is in certain media climates, however. The Italian press has pilloried the actress-director, born into a showbiz family, for speaking out against Weinstein so frankly.

She’s not letting up, though: In January she led a march for women’s rights in Rome. More marches are planned around the globe for Intl. Women’s Day. This year’s theme: Press for Progress.

Hayek endorses that slogan. “It’s going to take a while for [change] to unfold,” she says. But that doesn’t mean people should get frustrated or cynical: “We are in a space where we are willing to listen to new voices — to new possibilities.”

London-based Friedman, who is transferring her West End production of “Harry Potter and the Cursed Child” to Broadway, strikes a similar note. “This is a major moment in history for all women, across the first world, in all industries, and one which obviously affects our industry in the most positive way,” she says. “But this is not where it ends.”

Says she: “Ten years from now we will look back on the movement in the same way we looked at Rosa Parks for sitting at the front of the bus in 1955; this is a decade that will be defined as the final victory in equality for all women in all respects.”

Debra Kamin contributed to this report.